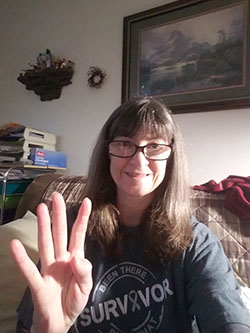 Around 1990 I went in for an MRI and they found my tumor by mistake. After seeing a Neurologist, I was put on watch and wait because the tumor was considered a slow growing tumor and wasn’t causing issues. This tumor was located between my brainstem and pituitary gland. Several years passed and in 2016 I lost my eyesight (at times) and I started having focal seizures.

By this time my Neurologist had retired so I was referred to another Neurologist. I found out that the tumor that was ‘so small’ years before actually wasn’t small at all. The tumor measurements were the same as before and this Neurologist said the tumor should have been removed already. He showed me my MRI and the tumor, and I couldn’t breathe, it was a large tumor.

So… my new Neurologist told me no one in our area could remove this tumor and gave me 2 different recommendations. I chose my doctor and went down to Indianapolis to meet him. After 3 months of tests and pre-surgery preparation, in May 2016 had a 10-hour surgery where they went up through my sinuses to remove my tumor (piece by piece). An ENT surgeon had to reconstruct and patch my sinus area. Surgery went well and 2 weeks later I left the hospital.

Recovery was going well (according to my family), I always felt there was something wrong. When I walked, I would walk like I was stepping high and my mind felt like I was in a fog. We were told to watch for a spinal fluid leak, but I didn’t have any of those symptoms. Five weeks post-surgery I woke up and I did not feel right, I had a fever and was super confused and had a nasty pain down my neck and I just knew something wasn’t right. We called EMS and they said it looked like a bacterial infection. My family said no, they said to watch for spinal leak, so there was some confusion.

After talking with my doctor’s in Indy, they decided to transport me back there. I was basically in a coma. After a week I finally came to. I had Klebsiella Bacterial Meningitis and I woke up as a 4 year old. I had to re-learn everything from walking and talking to thinking. I lost most of my long and short-term memory (I was pretty messed up)! After 1 week I was ready to go home (my family learned how to insert my meds through the pic line, I needed 2 more weeks-worth of medicine).

Less than a month later I started Proton Radiation in Illinois. The Center set us up with housing so I could receive treatment for 8 weeks. I had several side effects and felt just awful having severe nausea among other things. During treatment, I started my first round of therapies (OT,SPH,Physical). I got home to Indiana and it took 2 more years of therapy before I was almost back to normal. Graduated in 2018.

To this day I still have issues (short memory, processing issues, EMF sensitivity and Foreign Accent Syndrome of a 4yr old) but if I had not had my Brain surgery, I would be dead. I’m grateful to all the Doctors, Nurses, Therapists and the Volunteers in the hospitals who would try to cheer me up when I was at my worst and gave me and my family hope! This has been a severely bumpy journey, but you talk to me today and you can barely tell. I am grateful to be alive! This is my survival story.