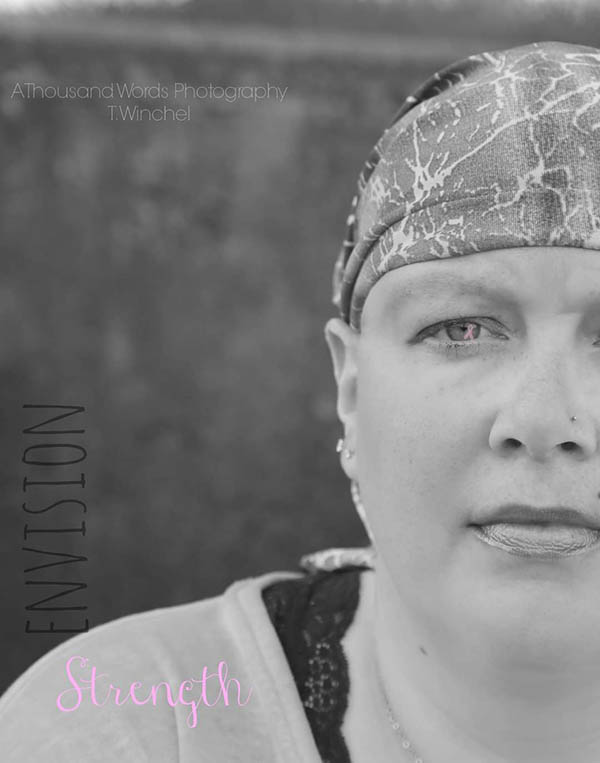 In April of 2016, it was just chance I think, I went to brush some crumbs off my shirt and how weird because I am sure I have done this numerous times before, but I felt a lump. I wanted to make sure I wasn’t just feeling things so I made my husband feel and he felt the same thing. So nervous the next day I got into the doctor and even though hesitant because I was only 33 years old and too young, they told me that they were sure it was just calcium deposits. But she said we will do an ultrasound. Well sure enough the ultrasound found the lump. The radiologist knew (he was certain) it was cancer but didn’t want to assume so I went for a mammogram. 3 days later they called and wanted me to see a surgeon to have his opinion. He too said no it’s not cancer you’re too young. We talked for a bit and he said just to prove it’s not cancer I will send you for a biopsy.

The next day I went in for a biopsy. 2 days later, I believe, they called and said the doctor would like to talk to you. I went to the doctor the next day and when he came in he said I am so sorry I need to apologize to you. He said the results came back, you have breast cancer.

I was left in shock and hate because for years I have asked for a mammogram simply because, at that time 10 years ago, my father had breast cancer and thought his could have been genetic.  It did come back that it wasn’t genetic but still I wanted to have mine in checked so I wouldn’t have to go thru this. But I now have to deal with it and roll with the punches.

After being referred to the oncologist (he was amazing) we set up for the 1st surgery which was to remove the lump. I just wanted to remove both breasts. I didn’t need them, I was done having kids, but the surgeon talked me out of it because I was so young.  On April 24, 2016 I went for a lumpectomy.  A few weeks after that I started treatments with my oncologist. I started with 24 weeks of adramyacin (also known as the red devil). This chemo made me instantly sick and I couldn’t stand to watch it be administered to me.

As we went thru these treatments my oncologist took family history and really dug into this. After all the digging and finally going through numerous appointments with genetic doctors I was told I have the BRCA mutation and it was linked to ovarian cancer. So, after all the talking and doctor appointments, after chemo I was supposed to undergo 33 radiation treatments. Since it was hereditary and linked to ovarian cancer, in 10 years or less I had an 87% chance my cancer would come back and I would need to remove both breasts, so I said we can do now and then save me from radiation.

After my 1st 24 weeks of chemo I had a few weeks off and then had to endure another 12 weeks of taxol chemo (much more tolerable). After that was finally complete (in October) we waited a month and once my white blood cells came back up I had to endure a double mastectomy. At this point we talked about implants. I didn’t want breast implants, but my husband talked me into them. I said the only way I would do this was if they could put my implants in the same day they removed mine, and the doctor thought she could.  It worked. She did fabulous. She was so excited she ran out to tell my husband I had cleavage again. LOL.

After healing from this surgery I kept up with my oncologist and in February 2017 I had to endure a hysterectomy.  After that I went straight into menopause. So, at 34 I was in menopause, no more periods.  But then came hot flashes.  Yuck.  So, after all this was complete my mom got tested to see if she was by chance the carrier of this gene and sure enough she was, but has never had breast cancer and still to this day hasn’t. She removed her breasts and got implants and then had a hysterectomy as well.  Although all the breast cancer had fallen on my dad’s side, he wasn’t the carrier. So, I would like people to know to trust your heart and push for what you want.