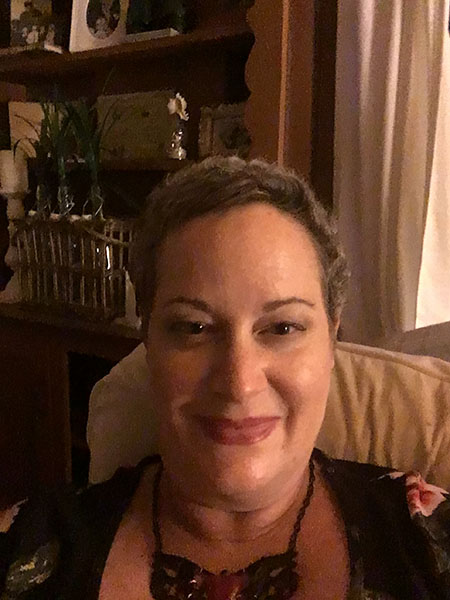 In July of 2017 on a long (8hr) flight home from North Africa (where we spend a lot of our summers), I began to experience a different and painful cramp, almost like a contraction. I began bleeding heavily and felt ill.

I felt bewildered because I had my mensural period two weeks before while on our holiday. It felt different and I was concerned. I usually don’t become concerned when it comes to my period because I have endometriosis and am accustomed to pain and bleeding. When we arrived home, I went on with business as usual but still felt pain and was very nauseous.

August came and I had no period. This was strange and I still felt off and in pain. I went to see a specialist that was recommended by my primary Doctor. The specialist put me on a progestin pill. It didn’t help and by October I still had no period and was taking over the counter caplets for nausea. The pain and pressure in my abdomen was increasing.

One night I felt an urge to urinate but barely made it to the toilet when blood, water and what I describe as an apple shaped clot/mass came out. In a panic, I flushed and more and more blood kept coming. The next morning I made an emergency appointment with the specialist and waited 3 hours to see her. I told her what happened and she said, “it was probably just the flu”. That was not the flu. I cried and was lost.

Two of my sisters suggested I was pregnant with twins, still carrying one and miscarried the other. A few days passed and still some bleeding and symptoms of pregnancy. I took two at home tests. They were positive. I was 48 years old and could not believe this. My primary ran a blood test because she could not believe it either, it was also positive. With that test we found my blood count was dangerously low and I had to be admitted to the ER.

No fetus was found. This lead to many tests and phone calls around Orlando area and no one had answers. Finally, the ER doctor found a Gyno/Oncologist that was aware of what I was dealing with. At my visit with him a few days later he informed me I had an extremely enlarged uterus and had a mass (molar pregnancy). He also found a spot on my left lung.

I needed a hysterectomy along with one dose of chemotherapy. Because I do not accept blood transfusions due to my religious beliefs, I needed to get my blood count up before surgery. I had robotic surgery and it was a success.

After surgery my HCG did not go down, it was rising and rising quickly. It was GTD (Gestational Trophoblastic Disease). This was devastating to me and my family because 2 years before we lost our Mother to cancer.

I began chemotherapy on Jan 4, 2018. It was all fast paced and I had no time to comprehend what was going on. I had a 3-combination chemo, 18-hour infusions every other week, which required 2 overnight stays in the hospital each time. My WBC (white blood cell count) dropped and I was given 4 Neupogen shots. I also experienced an infection in my mouth that required antibiotics and pain medicine. This was the only time that I was given pain medication even though I begged for some more due to the bone pain. I dodged the nausea, thankfully.

My body responded by the 6th infusion but, for precautionary measures, I was given 2 more infusions. It’s been 2 years off chemotherapy and my hcg levels were last checked in March 2019. I was released from my Oncologist care that month as well.

I’m now 50 years old and some days my body has been devastated by the chemo and GTD. It’s been a long lonely road for recovery. Many people are not aware or understand GTD. So many do not know how to respond when I tell them about my cancer. It certainly is comforting to know there are other women who have been through what I have, and now we are tribe members. I love u all and hope someday to meet u in person and share our experiences. Xo