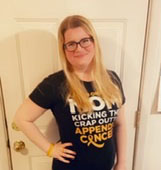 About 6 months after I had my son I had appendicitis. It was treated with antibiotics and I was told I had a 75% chance of never getting sick again. I was part of that 25% that got sick again and found myself in and out of the hospital the next 10 months.

Finally, I convinced someone to remove my appendix but I had to wait until my round of antibiotics took care of the swelling. Late September 2018 they finally removed my appendix and sent it off to pathology. October came and I heard the words that no one wants to hear “you have cancer.”

They told me it originated in my colon (but they really didn’t know). I saw an oncologist in a bigger city nearby who told me it was appendix cancer and I needed to see a specialist 2.5 hours away. We saw him about two months after my first diagnosis. He told me I would need another surgery called cytoreductive surgery (crs) and Hipec. I had that surgery December 2018 to remove my right colon and part of my omentum (fatty tissue over your organs).

I am NED (no evidence of disease) as of January 29,2019! I’m very fortunate that I was able to catch my cancer fairly early and that it was treatable! I didn’t need systematic chemo (many people with appendix cancer do) but it was treated with surgery.