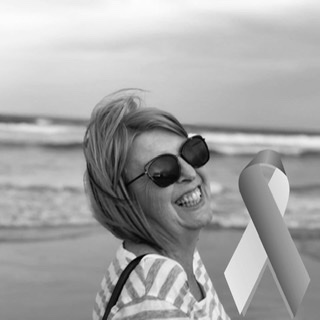 As with all cancers my diagnosis was unexpected, sudden and without warning. I was healthy, at least I thought I was, and living a full and happy life. No symptoms at all until one night I had a massive bleed when passing water.

I didn’t panic or even expect the worst as I thought it perhaps a middle age woman’s issue. With pressure from my husband I went to the doctor the next day and within a few short hours I was hearing the words that no one ever wants or expects to hear. TCC – Cancer of the Bladder.

The following days were a blur. Urgent surgery, followed by another surgery 2 weeks later, then test after test leading to 6 weeks of BCG that unfortunately resulted in a rare side effect – reactive arthritis. 6 months later a 3rd surgery to find out if the treatment had worked. Going into this day was the scariest time of all but hearing the news that the treatment had worked a few days later was one of the happiest days of all.

I still have a long road ahead as I can’t have the treatment again due to the side effects so every 3 months I will have an operation to biopsy the bladder and extensive blood and urine tests to pick up any changes as early as possible.

I feel very blessed to be given a chance and more time, as this is a privilege denied to many. I’ve stop wondering why / how this happened to me given that bladder cancer is not typically found in women and I don’t have any of the risk factors – never smoked, not in the age range and haven’t been exposed to heavy chemicals or toxic substances as in most cases. I’m trying to find a new normal now and make the most of everyday.