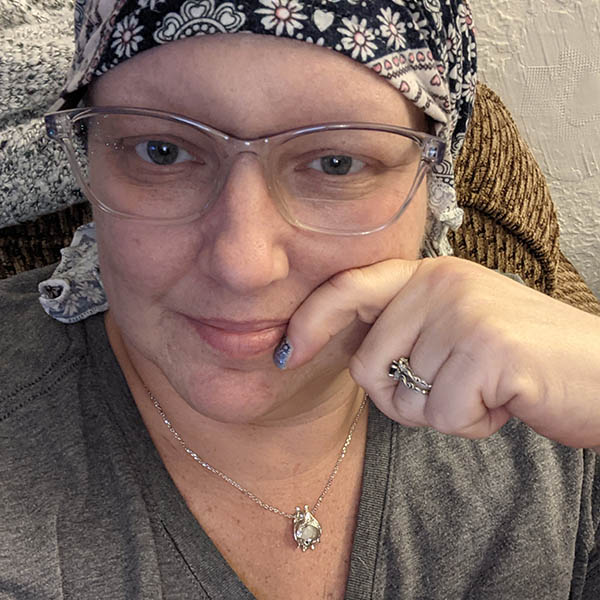 My story starts off fairly normal, actually. In 2018, at the age of 42 I had skipped a few gyno appointments over the years. My periods started to become extremely painful, often knocking me down 2-3 days at a time. I had also noticed weight gain and what felt like a “bubble” in the left side of my abdomen. During my appointment I was diagnosed with multiple large uterine fibroids, (one which was compressing my bladder and iliac vein) and a hysterectomy was scheduled. I kept asking if she was sure this was just fibroids or if I should be worried about cancer. My doctor told me she was absolutely sure it wasn’t cancer.

For some reason, the voice in the back of my mind told me to be on alert and that these weren’t just fibroids, so I begged for more testing. CT was done and came back with concern for cancer. Again, my gynecologist insisted it wasn’t. Once surgery day arrived, I was excited but also apprehensive. I remember waking up and seeing my husband who was visibly upset. The doctor was in the room, and I kept asking my husband if I had cancer. He said, “no but I’m going to let her explain what happened”. My doctor had gone on to do the surgery, only to open me up and see multiple tumors with many, many vascular areas. So vascular, that she was unable to perform the surgery without concern of me bleeding out. So, she closed me up and referred me to a local gyn/onc, all while swearing up and down “this isn’t cancer”.

A few weeks later, I had my appointment with the new doctor, who also felt I just had “tricky” uterine fibroids and said he was “pretty convinced” I didn’t have cancer. Again, I begged for more testing. Labs were drawn and fibroids biopsied. While waiting for results, I suddenly became unable to urinate, which landed me in the ER. The ER doctor had the pleasure of telling me that my biopsy results came back positive for leiomyosarcoma and one of the tumors was so large it displaced and smashed my bladder and was cutting off blood flow to my iliac vein, causing my left leg to swell and discolor. I was given a shot of morphine in the ER, told there was nothing that could be done there and that I needed to be seen by Cleveland clinic ASAP. Thankfully, Cleveland was able to get me in that week for an appointment and the following week for surgery.

I was originally told my type of surgery generally lasts 3-4 hours, so that gave my husband something to focus on. Six hours into the surgery my husband received a call from the surgeon who informed him that he almost had to make the decision to call off my surgery. He had said everything was a “mess” and that the largest tumor was embedded in my bladder, making it impossible to remove the tumor without also removing my bladder. My husband gave consent for my bladder to be removed and an ostomy created in order to get clear margins. About 4 hours later my surgery was complete, I did well and my doctor was exhausted. No chemo/radiation needed because he was able to get clear margins. I had to learn how to care for a urostomy but hey, I was cancer free!!

I had two PET scans done over the next three months. First one was clear and second one (done three months after the first) showed metastasis to my liver, lung and left buttock. So, they started me on Gem/Tax for six rounds. After completion of that, I was again “cancer free”! But, all good things come to an end. The cancer came back. This time I had two spots on my liver and multiple areas to both lower lungs. Once again, chemo was ordered. They wanted me on Adriamycin, AKA: The Red Devil. I’ve recently completed 6 rounds of that plus two liver ablations and although my liver is currently clear, my lungs remain full of tumors to both lower lobes.

As of today, I’m awaiting new orders on chemo and when I’ll be starting again. I’m now 45 years old. I’ve been a nurse for 20 years. I never in a million years thought cancer would affect me, but it did. If I could go back in time maybe it could’ve been caught before it became this bad. I’ve been battling for 3 years and by the grace of God I pray I’ll be around for another 30 because I’m not done living!!!